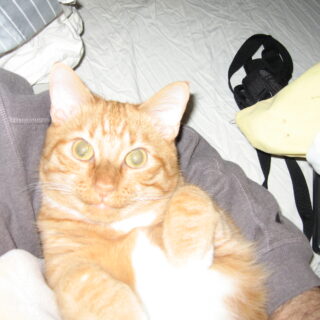 When I was trying to figure out a name to call him, I looked down as he looked up to me with that bright orange face —   Sunny !    Perfect name ! 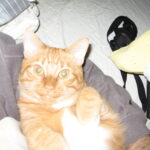 The mom cat who I took in as a stray had a litter of 3. I planned to give 2 to a friend –no way I could keep 4 cats–and had to decide which of the 3 to keep—difficult choice to say the least. I awoke one afternoon from a nap with something warm and fuzzy across my neck and realized it was Sunny.  That’s when I knew I could never give Sunny away. And he would continue sleeping on my chest or neck or side for many years until he started to have health issues. His rambunctious, independant style pretty much defined him. If he was hungry he would topple the trash bin, or he would jump up on the stove where he could reach the crackers—I found him one morning with a cracker box stuck on his head– he would plop down on  my other cat regardless of whether she wanted to play, when I took him to my folks house he would jump up on my dad’s bed when he was sick. My dad who was never a fan of cats certainly came to like Sunny.  He would eat whatever I gave him –  clean up the other cat’s plate. But he develeped health issues that slowed down his eating, caused his litter habits to degrade (would defecate outside the box). Eventually his appetite would drop while his GI issues worsended–went from over to under wieight. I saw more and more discomfort insppite of his meds and at 18 was euthanized at home. I sometimes wonder did I let him go too early–could I have gotten a few more months—but stepping back and looking at his downturn I think that would have been selfish.

Sunny you are a Gem ! May we cross paths somehow in ways the universe grants.