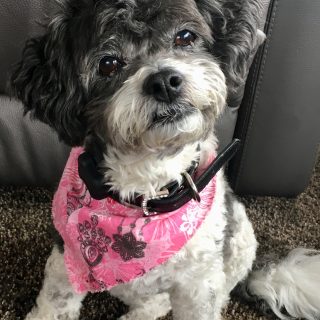 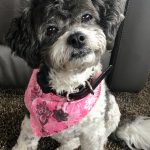 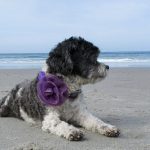 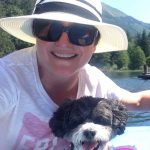 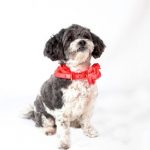 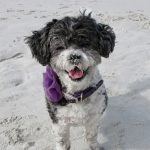 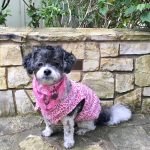 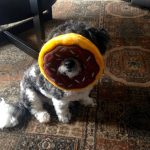 Keely was born April 13, 2006. Her name is an Irish dog name for “lovely”. And lovely she was. An old soul, kind, with a spiritual demeanour and incredibly smart.

My girl was chosen from a photo between the two females in the litter & we didn’t meet until I went to take her home. She was 8 weeks old, and the bond was immediate. It was dinner time on a Monday evening in June and that first night she settled in right away, not even a whimper.

She was so fun to train, she loved to be cheered on and rewarded. Her passion for treats really helped, so a little treat and big Whoohooo! = success. Her love for training, learning and mental stimulation was in her DNA and she enjoyed training into her senior years.

She completed three levels of Obedience training, followed by Agility which she enjoyed and was very good at. Flyball was less rewarding, she didn’t find it particularly challenging, but she still killed at it. During the pandemic she learned to play tik tac toe with treats and in her senior years she discovered her all-time favourite training class, scent work. Starting at 14 years old, she was a natural & loved it so much. I wish we had discovered it a lot sooner.

She never passed a good scent, be it a flower, pee-mail and especially food droppings. It took me a long time to figure out why she chased crows – simple, they dropped food. One time she dragged me to the other side of the street, where her nose had targeted a chicken wing, buried in the snow. She really was something else, very determined to finish whatever she started, no matter the task.

She understood so many words & was a wonderful communicator. The first word I recall her acknowledging was “cute”, she would immediately tilt her head recognizing this was a form of adoration and she loved it. I was amazed when she started to recognize “she” and assumed it was always about her. “WOW” was the magic word guaranteed to get her off her butt!

Keely travelled more than many humans I know! Visiting Toronto Kelowna, Victoria, Whistler, Calgary, and even attended a wedding in Kananaskis Alberta. In the US there were multiple trips to Florida, Seattle & Portland along with an air trip to LA for US Thanksgiving.

Our Road Trip to California, was probably one of my favourite holidays ever! She was a great travel companion, taking everything in stride, truly living in the moment. We drove through Oregon with stays in Portland and Eugene as well as Palm Springs, Carmel and Mendocino in California.

I shared my whole life with her. She was welcomed almost everywhere with me, massages, chiro, hair appointments as well as regular visits to the office. We enjoyed happy hour at our local pub’s pet patio, my favourite local brew pub, “Parkside” a.k.a “Barkside”, Rocky Point ice cream, amongst numerous other places. She especially loved going for a bike ride and sitting up front in the basket.

She was very independent and loved her own time. At a very early age, she enjoyed her one day a week, home alone. She often would move from room to room when I was home, to find her own space. And she had her own little world outside of me, which started with daycare at 11 weeks old and continued throughout her life. There was lots of love, attention, play mates and treats. She met her two boarding roomies there, Jackie & Ron. Both gave her a wonderful & safe life when I was traveling for work or pleasure

If there was socializing & eating involved, she was in!  My girl never passed a shop, restaurant or a neighbor’s home where treats were shared.  She would peak in the door/window or stop outside to see if anyone would notice her.

Christmas was Keely’s favourite holiday. It officially kicked off on December 1st when the advent calendar made an appearance. She spent the weeks leading up to Christmas, regularly investigating the tree-checking for new gifts, even climbing over top of them, & occasionally resting on a box. She loved to sleep under the tree & there wasn’t a gift bag left untouched. She sniffed them out and removed the tissue. Every. Single. Time.

I was lucky she lived a long healthy life. She was nearly 15 before she got sick for the first time, developing kidney / liver / gallbladder issues. It made for a rough Christmas and start to 2021. She had surgery in the Summer to remove her warts & cysts and recovered well. Unfortunately, soon after she had a ruptured cyst that was infected, resulting in another surgery. It was following that she started to decline, in her last week she spent a few days in hospital with no final diagnosis.  After returning home, she showed signs of neurological issues and our vet felt it was time to let her go. Give her the dignity she deserved and say goodbye.

We had an incredible 15+ years, and I had to be selfless and do right by her, she had already given me so much.

We were bonded to the end. When my girl was a pup, she tucked into my lower back when we went to bed. She would get in synch with my breathing, as she got settled in to sleep. It became our thing, and as the years went on, I would pick her up, simply hold her close and take a few deep breathes and we would breathe together. If either of us were feeling stressed or restless, it calmed us both down.

Following our goodbye, when Keely began her rest, it was pointed out that as her breathing calmed, I sighed along with her. I believe we were breathing in synch once again in that moment.

The morning after her ashes came home, I was certain I heard her shake, ears flapping as if to get up to go out. I turned as if she’d be there and when I looked out the window it was like magic. The most perfect rainbow. She had officially crossed over the rainbow bridge and was giving me closure.

We had a profound bond from start to finish, and for that I’ll be forever grateful.

Her legacy will long live on as a sweet, free-spirited girl, with a zest for life and the most heartfelt power of gratitude.

Keely loved to be loved, and she was loved by so many. She inspired many friends to get dogs with the hope they’d grow up to be just like her. And there isn’t one who can measure up, but of course I’m biased 😀

Life without my girl is going to be a huge adjustment. There’s the loss of course, but to be so small, she sure filled the room. She was a character, truly had so much personality. She made strangers smile and people who knew her laugh.

The cushions will never be out of place, her favourite chair won’t lose anymore fluff from nestling in it, there’ll be no more stealing seats, no more pawprints on the clean sheets or floors, and the hardest part of course, no more days with my girl.

She loved life, from all the training classes over the years, to our travels, social events, parades and parties. She had a serious strut when she wore a cute outfit or even a crazy costume.

She always humoured me by trying anything. And she fought so hard for me in the end. She was tired and I owed her the rest.

I gave my all to her, and I know she loved me loads & appreciated the wonderful life we had together.