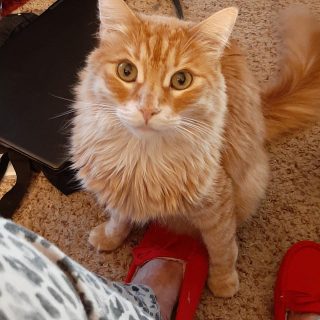 My Kobe was a very special Boy! I have so many treasured memories of him. He had so many characteristics of a dog than a cat. He was such a love bug! He would sit like a dog ready to eat mama’s vegan food, He loved popcorn and Cheese whiz given with his chemo medication. He always loved to jump on the bed right onto mamas chest and suck on his paw thumb. When he would get tired he would lay by mamas side, and in the mornings when mama would wake up Kobe would be right across from mamas head waiting for me to open my eyes to wish me a good morning. I am not a morning person so he always made my mornings shine bright!! He would also be waiting for me when I came home everyday, it would never fail his cute little precious face would always be peeking out of the blinds waiting for mamas love!! 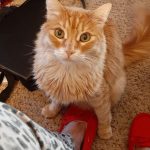 It is with a heavy broken heart that I had to make the most excruciating painful decision to lay my Beloved, Most BEAUTIFUL Kobe to rest 8/15/21. I chose to do at home euthanasia so my baby could go peacefully in my arms. I’ll never forget the moment Dr. Analucia looked into my eyes and said “Your Baby is an Angel Now”

Kobe and I were surrounded by so much love and support from my Family and my Best friend Suzy. Dr. Analucia was truly a BLESSING and I believe GOD chose her to be with us during this painful difficult time. She was so comforting, compassionate, and empathetic she really showed she cared! I was able to spend as much time as I needed with my baby before and after that final moment. I grasped on to JESUS the whole way to get me through as I had so much fear and anxiety, and now so much emptiness, and emotional pain! I am missing my Kobe!

I rescued Kobe from my sister’s friend she found him outside walking around in circles. I thought he was so precious and cute; he was a little orange/gold fur ball, and I wanted to give him a chance at life. He was 2 months old when I got him. I was living with my mom at the time, and I already had Ku’uipo so I told my mom Kobe was for her and asked her to name him. She Loves Kobe Bryant and he was gold, so she named him Kobe!! That name fit him well! Kobe was a feisty rebel baby and too much for my mom to handle, so I said I would foster him and find him a good loving home. I worked with “Caring Friends Cat Rescue” (Julie and Sky) who were very nice, caring, and helpful. They helped me prepare Kobe for adoption. However, as a few months went by I fell more and more in love with Kobe, and he got a long with Ku’uipo so I decided to keep him. He continued to be a feisty lil rebel (Lil Stinker) and I continued to show him love. Eventually Kobe began to recognize that I loved him, and I would not cause him any harm, so he began to trust and love his Mama! Kobe and I adored each other! It was funny because my whole family would be afraid of Kobe because he would swipe and bite them if they came close, but that’s only because Kobe was a very anxious cat and scared of people. As he got older there were times he would let them pet him, but it wouldn’t last long till he snapped at them again, but he didn’t mean any harm. About a year later I moved from my mom’s home and Kobe instantly became the King of the house! Kobe was a very special cat, he was different than most cats he had dog characteristics such as if I had to put him in the room because people were coming over, he would scratch on the door like a dog to get out, he would sit like a dog and beg for my food when I was eating, and he loved to eat vegan food! (I only gave him a teeny bit each time). He would always come when I called his name, and it would never fail he would always be waiting in the window for me to get home from work. If he wasn’t there, I was always scared something had happened, this fear increased after he got sick with Cancer. He would also jump on my bed at night to lay on top of me for love. I would look closely in his eyes and tell him how beautiful he was and how much I loved him, He had beautiful green eyes and I could see his love and adoration through his eyes we had such a special bond, he was my baby boy! When he got tired, he would always lay by my side when he wanted to sleep. He had a funny walk that my niece would say he looked like a cartoon character. I would always tell him how cute and adorable he was!!

A few years later I took care of my niece’s cat Sparkle, so I had Kobe, Ku’uipo and Sparkle. Although Kobe was always the dominator of the house, for some reason he was afraid of Sparkle (she is an older smaller petite cat) so I thought this was funny. However, in the end for the most part they all got a long and loved each other.

In May 2020 I noticed Kobe started losing weight, his eyes and fur were dull and did not look well. I took him to the vet and on May 23rd, 2020, I got the dreaded painful news that Kobe was diagnosed with Small Cell Intestinal Lymphoma Cancer. The Vet immediately started him on chemo medication, prednisolone, and nausea medication daily. So, from the time of his diagnosis till he passing I gave him medication daily. I had a hard time administering the medication; he ate the greenie pill pockets for a while then caught on to the medication inside and wouldn’t eat it, then I tried the pill popper, butter nothing. My Vet recommended I use cheese whiz and Kobe Loved it!! Our medication routine was holding him close facing me kissing him, telling him what a good boy he is and letting my lick the cheese whiz with the medication. Kobe wouldn’t eat or drink anything towards the end, but he was able to lick and enjoy some of his cheese whiz and I used a dropper to drop water on his lips. I was glad he was able to enjoy his favorite treat one last time.

Kobe’s vet called me this morning and explained more so I could understand what happened she said this is rare, but it does happen that we treated Kobe’s Cancer the best we could, and we couldn’t have prevented this from happening, she confirmed that surgery would not have been a recommendation she would have made because of his cancer and his condition; that I made the right decision. In my heart I know this was the right thing, but I am still in EXTREME pain with having to make the decision and losing my Kobe. I miss him so much!! My precious fur babies mean the world to me they are like my children, and this has crushed my heart, this will be a long healing process but through GOD and the love and support from my friends, family and I still have my precious Ku’uipo I will get through this on day at a time.

I have so many memories of my Funny Beautiful Boy! Kobe brought me so much JOY and HAPPINESS! I will never forget his beautiful green eyes and soft fur!!😥💔❤

Kobe has now crossed over the Rainbow Bridge in Heaven! He is now an Angel in Heaven!

“How lucky am I to have something that makes saying goodbye so hard.”
Winnie the Pooh

KOBE my Chunky Monkey, Mama’s Boy! Words cant even say how much I love and miss YOU! a Piece of my heart was taken when you left this earth! My life will not be the same with out my precious Beautiful Boy!! I am so sorry I couldnt save you from that horrible disease and that this unexpected tragedy happened💔😥 until we meet again in Heaven my Strong, Courageous Handsome Boy!❤
Golden Eyes

When golden eyes no longer glow,
and we both know it’s time to go,
Don’t look at me with eyes so sad,
but think of better times we had.

When sunlight did upon us shine,
and happy days were yours and mine,
And through the grass we both did run,
and on our backs we felt the sun.

Think not of this dark final hour,
think not of when our lives turned sour,
Think not of hopelessness and pain,
but think of joy and laugh again.

For in that final act of love,
you released me to heaven above,
Where finally from pain I’m free,
where one day you will join with me.

Where together again we will rejoice,
and you and I as with one voice,
Will in perfect harmony sing,
of the joy and pain that love can bring.

And remember me just as I will,
always think of you until,
At last again I see your face,
grieve not, I am in a better place.