Cesar was a serious lover who hated violence and wanted everyone to get along. When my boyfriend and I would practice west coast swing dancing at home, he would bark and try to get between us. He hated people arguing, toy water guns, “hand” formed guns. 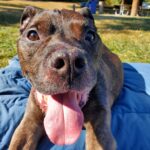 Cesar was born in 2008 (we think). It has been a running joke that we think he has been 12 for several years now. His gotcha day was on September 9th, 2014. It was supposed to be a temporary fostering agreement while his owner sought help with drug rehab but his owner relinquished ownership rights to him later that year. He is a gentle loving dog who always underestimated his size. He would either snuggle with the newest person’s lap in the room, or topple everything over chasing my other Jack Russell Terrier Mix around the room.  He loved pets just as much as food, and was a silly dog who liked pulling acrobatics when he was young to find the most prickly bush to poop onto. He was always up for playing and would whine daily as soon as I came home from work and before I had to leave for work in the mornings. I was his favorite person, and he was mine. His arthritis started to get very bad over the last couple of years, possibly also complicated by Cushing’s disease and died peacefully at home surrounded by his loved ones.

“I think we dream so we don’t have to be apart for so long. If we’re in each other’s dreams, we can be together all the time.”
A.A.Milne